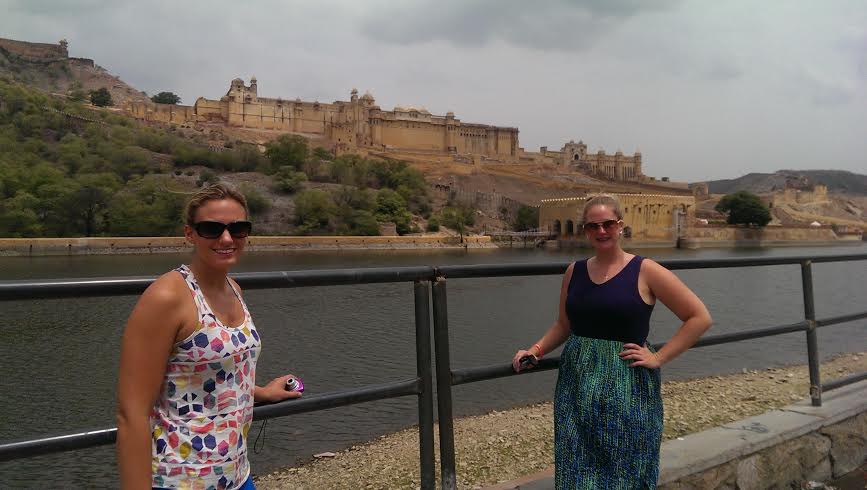 Jaipur is my last stop to complete the Golden Triangle (Delhi, Agra, Jaipur). I was leaving from outside Agra (from Wildlife SOS) by car with the seven volunteers. We had hired Global Trip Tours and Travels to drive us to Jaipur. DO NOT USE THIS COMPANY!!! The price was $8500 Rupees ($134 USD), which split four ways was reasonable for a five-hour air conditioned car. However, the drivers (2 cars) stopped and had a thirty minute breakfast and left us dumb-founded that this was actually happening. The stop had bathrooms and a souvenir shop, so at least we had something to look at while we were waiting patiently. Then when we got to Jaipur, they had no idea where our hotel was. We drove around Jaipur for an hour to find two hotels, stopping at least 20 times to ask directions of the locals. We tried to have the drivers call the hotels for directions, and they refused. We all made it safely, so it could have been worse. On the positive side of things, the drive to Jaipur was full of things to look at through many towns, tons of camels, the terrain changing into the mountains and my favorite, a traffic jam of sheep … 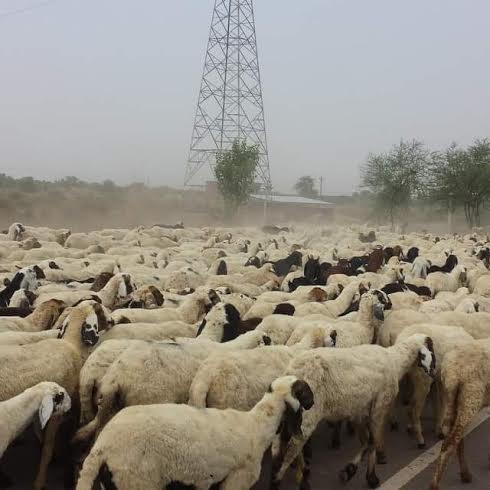 In Jaipur, my friend and I stayed at Umaid Bhawan (found through hostelworld.com), which was like a little palace! After volunteering and “roughing” it, Umaid was like heaven on earth, including wonderful room service and a pool! Our first night we ordered room service (had both Indian and “American” food choices) and stayed in the extremely comfortable beds in the air conditioning planning our upcoming days. 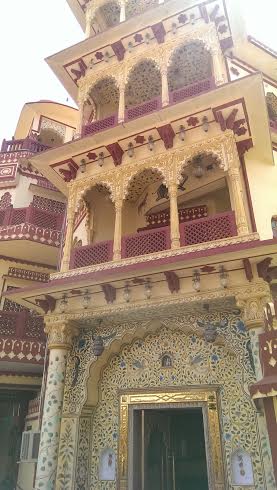 Outside view of Umaid Bhawan 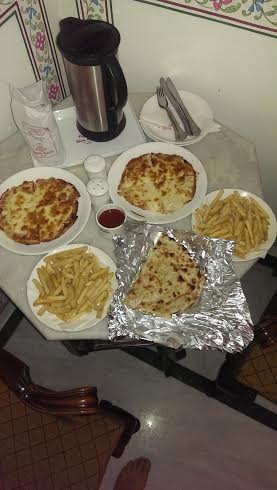 Carb overload … we were craving American food .. with a side a naan

Umaid Bhawan has a large breakfast buffet for $275 Rupee ($4.06 USD), which had numerous choices and a made to order omelet station. A buffet like that in America would probably cost around $30 USD or more. 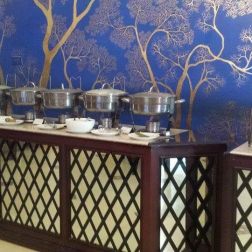 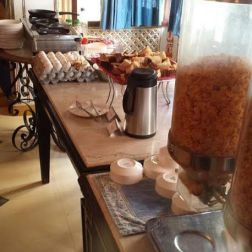 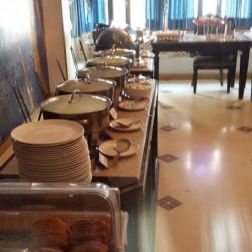 The hotel has a roof top restaurant which was okay. I had a gram flour dumpling dish and I did not like the dumplings. Probably the only food in India I actually didn’t like. Umaid made everything extremely convenient for their guests. They had money transfer at the reception desk and you could book your train ticket through them without having to leave the premises (Jaipur Station to Delhi is 4 hours and 30 minutes. An air conditioned train with regular seating was $750 Rupee/$11 USD). Umaid Bhawan took care of everything! They also have personal drivers outside of the hotel that they use for tours and transportation. I would HIGHLY recommend Umaid for your stay in Jaipur!

After having an extremely restful night and time to plan, we started our day by renting an air conditioned car for 8 hours from outside the hotel (S1200 Rupee/ $18USD). The driver picked up a tour guide who said was included in the rate, but we did tip him after the day was finished. You can rent for either 4 or 8 hours at a time. We figured 4 hours would be too short, whereas, 8 hours ended up being a little too long.

And without further ado … Jaipur, AKA the Pink City through the eyes of the wanderlusting yogi …

This is a beautiful UNESCO World Heritage site, surrounded by a wall that they compared to the Great Wall of China (cover photo has Amber Fort in the distance) . Inside the fort, there are some unique experiences to try. There is a temple that you can go in and get blessed and you can also sit/dance with a cobra. Having a tour guide with us through the fort was helpful to hear all about the history of the fort. 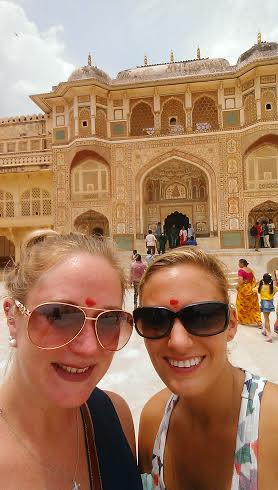 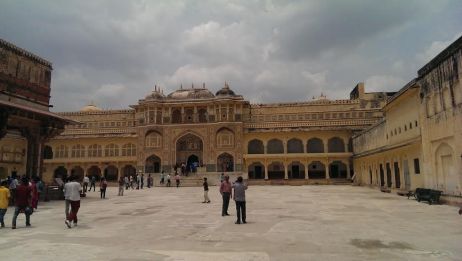 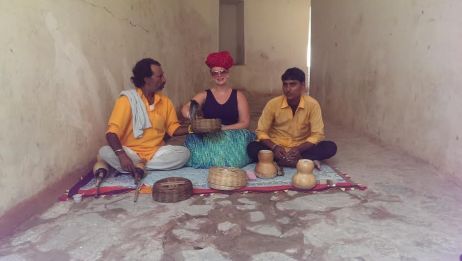 This was an old temple in the middle of the water. We were told by our guide that it is currently being turned into a hotel. It is a quick stop for a picture. 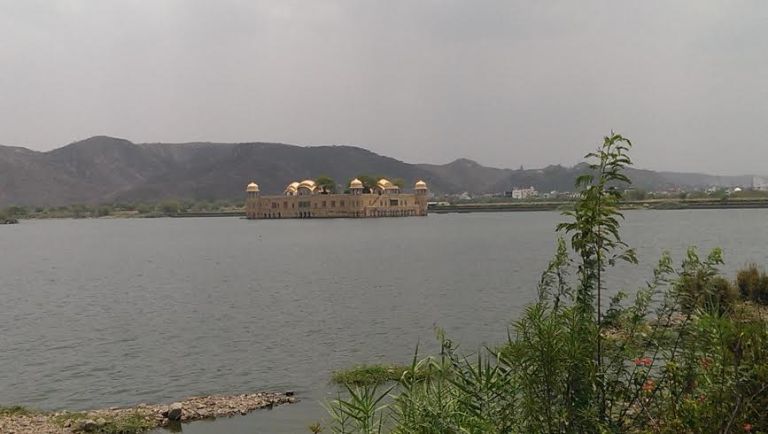 Jantar Mantar is a collection of astronomical instruments. It had a collection of zodiac sign sculptures, and many different sundials. Our guide told us that this location had the largest sundial in the world. 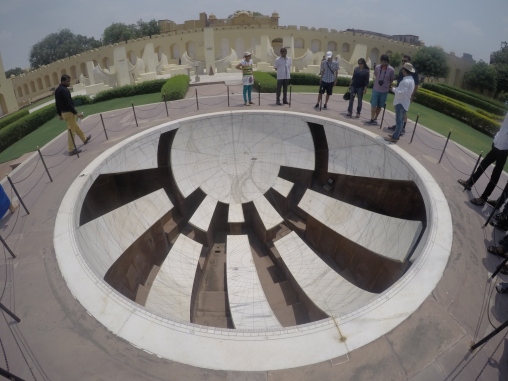 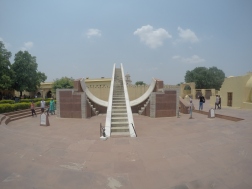 This is an extremely random place to visit. It is the cremation site for royal woman. The reason we ended up here is because a woman I had spoke with in Agra, India talked about how she saw bodies being cremated in Nepal, and she thought they did the same thing in India .  My friend and I thought that would be a unique experience, so we asked if there was anything like that in town and we were brought here. We did not see anything close to that. Just a bunch of burial tombs. It was so hot, so we sat in the shade of one of the tombs and took in our unusual surroundings. (On a side note, our guide did take us past a local cremation site for the non-royals, and at this site, you can watch the cremation process, if you are a MAN. So again, we just looked under the wooden walls and saw plenty of wood ready to be put to use. We were close, just the wrong gender!)

This is a huge warehouse of expensive items and souvenirs. They have everything from saris, to jewelry, to handcrafted goods with about a 100% markup. However, their set up is pretty ingenious .. You go into the first store, and this is when you realize you will not want to buy anything from here .. but the “only way out” is to go through a different exit into ANOTHER STORE … We at least went into about 10 stores and we each ended up buying a nice scarf for our mothers, which we later on found the same type of scarf for much cheaper at the local bizarres. We wonder if the guides get a cut from RCI for bringing guests here .. only reason I can think of why the guide was so adamant to have us go, but please AVOID RCI AT ALL COSTS!

Hawa Mahal, simply put, is a wall. It is a pretty wall, but a wall. We starred at the wall for a moment and then shopped around a few local shops. We bought a couple pairs of pants and my favorite deal/purchase was my elephant tapestry. They tried to sell it for $1500 Rupee ($22 USD) and I bargained it down to 500 Rupee ($7.30 USD). 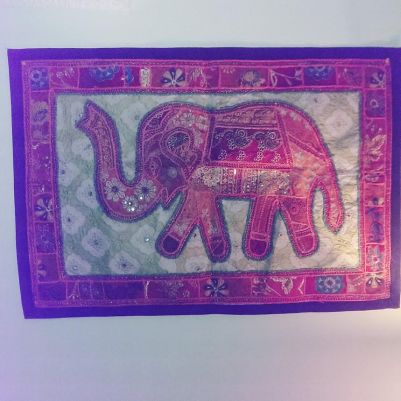 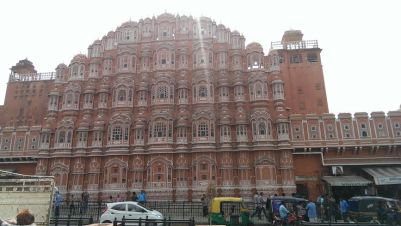 Finally, after a long day, it was time to eat. Our guide suggested Virasat, even though it is a little bit outside of Jaipur City, we had time left and wanted a good vegetarian meal. The restaurant is three floors, offering different price ranges on each floor. Fine dining was on the second floor .. but we ate at the Rajwada Restuarnt and it has an excellent selection of Indian and Rajastahani food.

*On a side note to some Indian traditions … After eating at Virasat, the waiter brought out a cup of warm water, which my friend and I saw before in Delhi. Not sure what to do with it in Delhi, to be respectful, we pretended to drink the hot water. We again went to pretend to drink the water and the waiter nicely came over laughing and told us the water is for washing your hands after meals. It was a little embarrassing, but now I know, and so do you! Don’t drink the water! 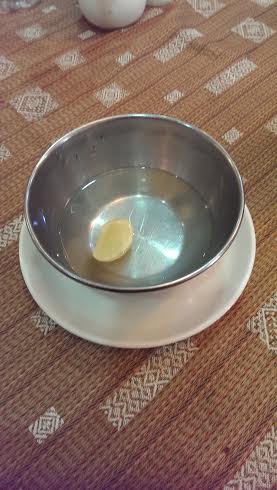 The next day we walked around Jaipur for about 5 hours to all the different bizaars. Some of my finds and recommendations …

Jaipur was a little more of a relaxing way to end the Golden Triangle. You do not need a long time to see everything in Jaipur, I few days is plenty. Jaipur also has an airport that you could leave from, even though I did go back to Delhi for my flight to Tokyo. 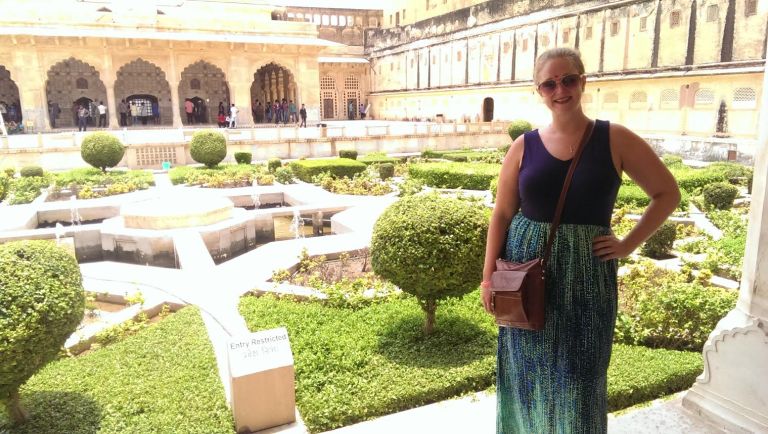 While driving around in the tuk tuks, make sure phones, cameras, etc. are secure. We turned a corner and my friends phone went flying out. It survived, but could have been a lot worse!